The long road to this book

The long road to this book – I.
UN-SEEN – Vann’s story

After two tours around Cambodia in 2018, visits to all the scenes of Vann’s life, and more in-depth research into the Cambodian wars, I am ready to make a first draft of the book. A book that, at its core, revolves around the bombing raid in 1970.

I put together the initial concept for the book as a garden-variety photo album. An experience that’s entirely new to me. For the longest time, I have collected photographs of my travels, holidays and family in photo books, adding context in the form of short stories.

A photo book about this family, to be brought onto the Cambodian market, is a different kettle of fish. Plenty of pictures, but what story do I want to tell?

Which storyline shall I follow? How much historical information should I include? And which pictures fit with this? Or should I be approaching this the other way around? Let the pictures do the talking, with the help of captions?

This process eventually leads to a square, black book with a picture of Vann hiding behind his hands, blurry from the long exposure. A book, too, delivered by its producer in a black (gift) box.

In many ways, the first draft looks a lot like the many photo books I’ve made for personal use: pictures with added context, written-out stories, family-oriented.

It could have been a family photo album, if it weren’t for the fact that it focuses on loss. I go out to investigate, together with Vann in Phnom Penh. To begin with, a round of family visits. What does Vann think of the book? How does he feel about the inclusion of poems by Cambodian poet U Sam Oeur? And importantly, what do his family members think? His oldest brother with a rice business in Phnom Penh, his oldest sister who was eight at the time of the bombing, his wife Sophea and their children?

The book now goes by the name of UN-SEEN, Vann’s story – but it tells the tale of the Nget family and the loss, over a period of 30 years of warfare, of eight children and one grandchild.

The long road to this book – II.
UN-SEEN and the Nget family

I need to apply a little bit of pressure before Vann agrees to bring me into touch with his brother Thorn, the eldest sibling in the Nget family. He appears to do so reluctantly. We take the tuk-tuk and pay a visit to Thorn and his wholesale rice business.

Thorn looks surprised as Vann proudly presents Vann’s Story to him, standing out in the street alongside the tuk-tuk.

Vann translates the story and shows him the pictures. Then something unexpected happens. Thorn gets emotional at the sight of the images and as the story reaches his ears. He talks to me in Khmer:

“… so small still, yet so much violence, all those bombs, all that fire”.

For a moment, Vann is astonished.

Upon my invitation, we have lunch together. Thorn shares so much information, while Vann translates bits here and there, losing himself in Thorn’s stories. All of a sudden we have an abundance of little added storylines that offer clarification as well as deserving attention.

Soon after this meeting there is a phone call from the oldest sister, Ry, who lives in the village next door to Khun Ann and youngest sister Oun. She too wants to share. So off to the village we go.

As Ry tells us her side of the story, more family members start to join the conversation. One by one, they come to take a look: the widower of the oldest daughter who died in a Vietnamese attack alongside her newborn baby, her oldest daughter, an aunt, Oun’s children who still live at home.

We drive to the small clinic in Chhonca Andung, and there too people are slowly beginning to talk about what happened so long ago.

These stories belong in the book!!

The long road to this book – III.
Publishing: what, where, how…?

Back in Phnom Penh with Vann, we go out looking for a printing company. What will it cost to print a book like this one? A small book, 20 by 20 centimeters, with a hard cover and photography? Is that even a possibility?

Vann makes a few calls, and gets hold of two addresses. We drive there and are greeted by the boss, who flips through the first draft, seemingly interested. He can print the book for a few dollars apiece, as long as I order 2,000 copies. I would be paying the same for 300 copies.

I find myself stuck with lots of questions and issues. How on earth could I sell that many books? From the hotel I get in touch with the Netherlands. My husband is skeptical, and my commercial son is more skeptical still. How do I find a publisher? I decide to reach out to the Netherlands, to a few people I know who are experienced in this field.

It’s all so much more complicated than I had pictured it (well, duh…).

Do I trust the men in Cambodia to sell books to their clients and contacts? I have my doubts.

At the hotel I get to work on something of a brochure, around 10 pages long. All I need is a copy shop to turn it into a booklet. The men, Vann and Da, could use the brochure to gauge interest among the hotels they know, the museums, the passenger boats on the Mekong.

If they dare, they can even try to sell their brochures for a few bucks each. I also have flyers printed, for the men to give out to all of their foreign customers.

The long road to this book – IV.
Publishing

Back in the Netherlands, I am working hard at reconstructing the book after the addition of the stories told to me by Thorn, Ry and the other family members. They are complementary.

I start looking for people who can help me, such as a designer who can take care of the book’s appearance, ensuring a well-balanced design.

Through my own network, I am led to Thijs Krijnen. He soon feels invested, both in the story and the book.

I speak to a former publisher: Would this book be sufficiently of interest? I am told it would.

I talk to people involved in media and social media, about how to capture your potential audience’s attention.

Armed with all this advice, Thijs and I get to work on putting together a promotional booklet. I search for journalists in the USA, at the New York Times. After all, this book belongs there too. On a trip to New York, I take a pile of envelopes containing the promotional booklets with me. I hand them over to the newspaper, personally addressed and with an accompanying message.

In November, I return to Phnom Penh with a completely new book – still UN-SEEN.

The long road to this book – V.
Back in Phnom Penh

Along with Vann and, this time, my own husband too, I travel around with the book to visit a number of people who are willing to give me feedback. We have dinner in Siem Reap with Bill Morse and his wife Jill. Besides excellent feedback, they also give me advice on who else to approach.

We stop by the War Museum once more, and again the book receives a positive evaluation. It evokes an emotional reaction.

Luke Hunt opens up his address book and helps me find my way among a network of expats.

Things are starting to get in motion. More important people, such as William Bagley of Monument Books, offer me valuable feedback and tips and tricks.

Nico Mesterharm agrees to help set up an exhibition at the Meta House, combined with a book launch.

Meanwhile, there is a growing realization that Cambodia is where UN-SEEN belongs – that it is here, most of all, that this story must become seen.

The intention is to publish this book in Cambodia. That is where the story belongs. Alongside the atrocious stories of Pol Pot and his Khmer Rouge (1975-1979) there ought to be a story of what happened in the period before that (1969-1975).

More than 115,000 bombings of the eastern provinces of Cambodia, during the Vietnam War. The family loses five young children. This story is at the heart of the book, accompanied by the threat posed by the various wars fought from 1970 until the eventual peace of 1999. The book has triggered conversations between the family, the youngest generation, and the village. Never before did they talk about the bombings, the family’s life under the nearly constant threat of violence, the many dramas connected to this and, at the same time, regular life that just needs living.

The Documentation Center of Cambodia in Phnom Penh also wants to include the story in its collection, not to mention translate it into Khmer. Eventually, it will be made available to schools, libraries and communities.

By January 2020, all the arrangements have been made:

A date was set in April 2020, in commemoration of the invasion of Cambodia – 50 years on.

The long road to this book – VII.
UN-SEEN – Seen in the Netherlands

The pandemic changed everything.

Eventually, in September, Thijs and I started transforming UN-SEEN into a book for the Western, Dutch market. 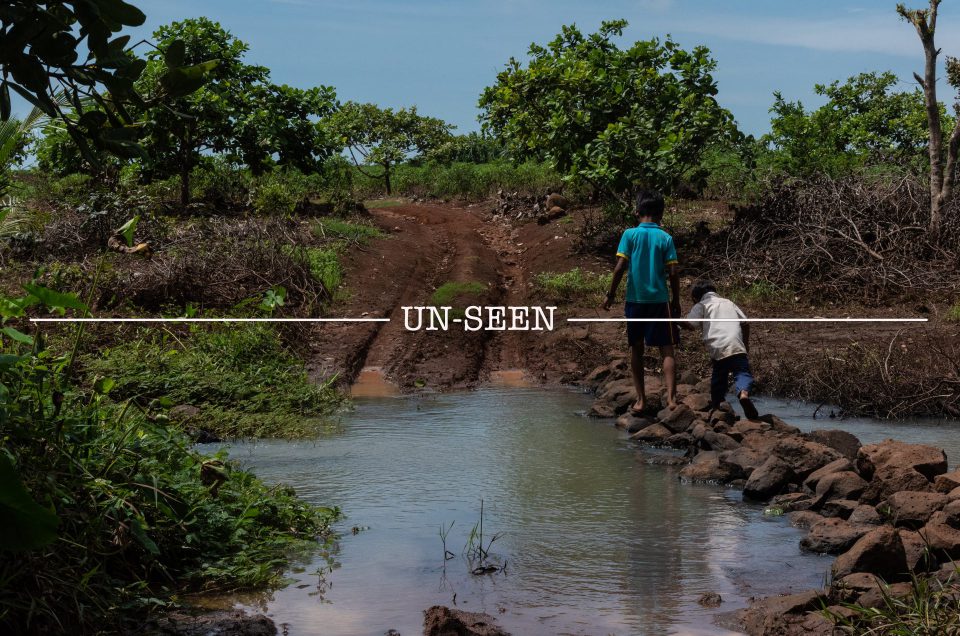